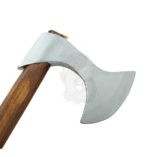 The Francisca was an early medieval throwing axe used by the Frankish and Germanic people during the VIth to VIIIth century.

An early medieval model of an axe mainly used by the Franks in The VIth to VIIIth century. Some findings confirm that the Francisca was also present among the Germanic people of that period.

This axe has a characteristic arch-shaped head which widens towards the cutting edge, much like the later Viking axes. It was originally meant to be thrown at an enemy to break shields or wound them before engaging in melee combat. It was designed to cause heavy damage this way even if the blade per se did not connect with the target.

The axe includes an oak handle meant for melee combat. It is possible to order an unhafted blade, which should reduce the package size and shipping costs.