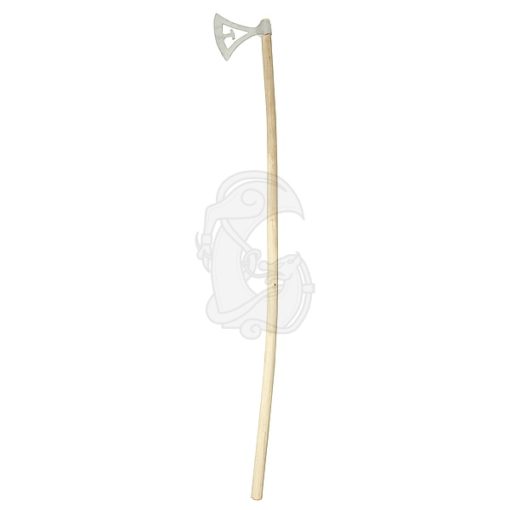 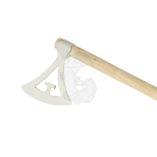 One of the most iconic weapons of the Viking Age, the Dane axe. Openwork blade for even greater manuverability in combat.

One of the most iconic weapons of the Viking age –  the Dane axe. Used by the most elite and experienced Viking warriors, the Huscarls. It’s design made it a very efficient and versatile fighting tool which could be used for cutting, thrusting and hooking while weighting very little (500-700g). The effectiveness of the long axe was attested during the battle of Stamford bridge in 1066, where a warrior armed in single handedly slain 40-50 Anglo-Saxon soldiers while covering the Norwegian retreat. It was also a weapon of choice for leaders, Wilhelm the Conqueror and St. Olav was often portrayed wielding it.

This axe was made from high-quality carbon steel. The blade is openwork and decorated with a Thor’s Hammer, which greatly reduces it’s weight and allows for even more manoeuvrability during combat. It comes with a hazel wood haft, which may slightly vary in lenght depending on the model. It is possible to order an unhafted axe head, which should decrease the package size and delivery costs.