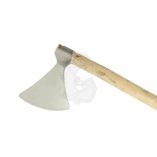 One of the most iconic weapons of the Viking Age, the Dane axe.

One of the most iconic weapons of the Viking age –  the Dane axe. Used by the most elite and experienced Viking warriors, , the Huscarls. It’s design made it a very efficient and versatile fighting tool which could be used for cutting, thrusting and hooking while weighting very little (500-700g). The effectiveness of the long axe was attested during the battle of Stamford bridge in 1066, where a warrior armed in single-handedly slain 40-50 Anglo-Saxon soldiers while covering the Norwegian retreat. It was also a weapon of choice for leaders, Wilhelm the Conqueror and St. Olav was often portrayed wielding it.

This axe was made from high-quality carbon steel. It comes with a hazelwood haft, which may slightly vary in lenght depending on the model. It is possible to order an unhafted axe head, which should decrease the package size and delivery costs.